This new Church would be more democratic and responsive to the needs of its congregation and since its inception more than 150 years ago, Christ Church has not wavered in it’s original beliefs. Contact Us

In 1863, Rev. Septimus Jones led a group of people who wished to form a new Anglican church. This new church would be more democratic and responsive to the needs of its congregation and since its inception more than 150 years ago, Christ Church has not wavered in its original beliefs. Today social equality and parishioner involvement are still at the forefront.

The opening and dedication of Christ Church Anglican took place January 1, 1865 in a modest structure. It was the first church in Belleville to abandon the practice of renting pews and to maintain free sittings for everyone.

In 1878, Rev. W.C. Clarke became the new rector and the church flourished during his 3-year tenure. On April 25, 1881 fire broke out and the original church burned to the ground. The cornerstone for the new church was laid on October 4, 1881 by the Grand Lodge of the Masonic Order. This was the beginning of our Christ Church building where we worship today. This church was formally dedicated on Easter Sunday, April 9, 1882.

By 1887, Rev. Samuel Dawe was rector. The congregation continued to grow and in 1905, Rev. R.C. Blagrave became rector and during his stay, the membership doubled, necessitating the building of the church hall in 1910 to accommodate a very large Sunday School enrolment.

Canon Blagrave was succeeded by other rectors including Rev. W.C. Swayne, during whose term the rectory was acquired. Under the direction of Rev. C.E. Clarke, the Sunday School saw further growth. He was followed by Rev. G.G. Wright and Rev. J.C. Sparling. Canon J. B. Creegan was rector (and later Bishop) between 1950 and 1962. During this time the new church hall was built. Both the rectory and church underwent major repairs.

Canon R.B. Deblois Wright arrived in 1964 and was succeeded by Archdeacon John R. Neal in 1988. In 1989, as the parish looked forward to its 125th Anniversary, the outdoor restoration was completed. At this time, Christ Church served 260 families. Currently, Christ Church serves in excess of 150 families.

Archdeacon Karen Dukes was our rector from 1999 to May 2004. In September of 2004 Rev. Michael Oulton was inducted as our new rector. Under his leadership we enjoyed renewed spiritual growth. Rev. Oulton was elected as Bishop of the Diocese of Ontario on February 11, 2011 and retired from Christ Church in May of 2011. Rev. Michael Rice succeeded Rev. Oulton and after 8 years Rev. Rice retired from Christ Church. In December of 2018 Rev. Jeff O’Hare assumed the interim rector position then succeeded to Rector of the Parish in October 2019.

We are fortunate to have had many curates and associate ministers over the years who have added to the spiritual life of our church and have contributed to the tradition and splendour of our Church. Christ Church is a beautiful well-appointed structure with several magnificent stained-glass windows and a striking gallery Chapel that overlooks the main interior of the church. Much of the furnishings in the gallery came from the former parish of…after its closure in ….

Whilst our History informs us where we are from and the purpose of the establishment of the parish, we continue to be a living History of the story and the journey of the people of God as we continue to serve this community of Belleville as the Anglican Church. Come join the journey… 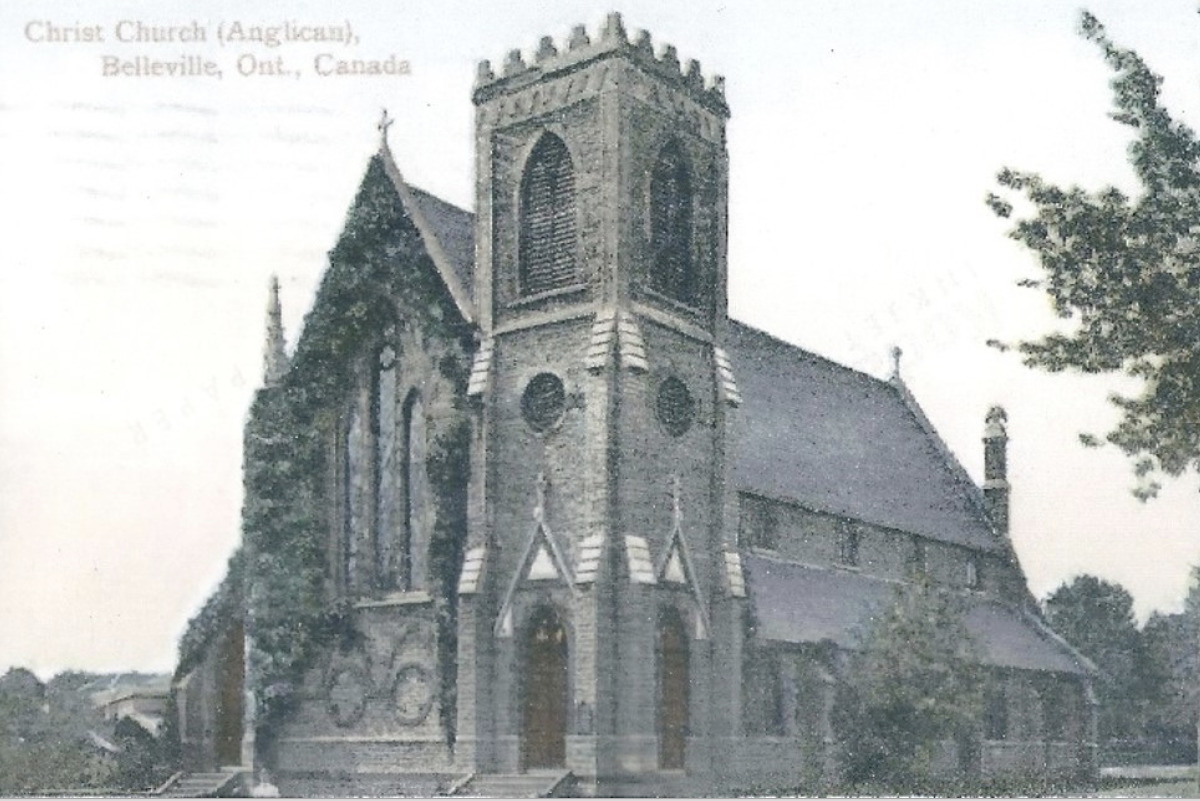 The Church by the River….
Take a look at the activities and projects happening at Christ Church, which you are most welcome to come and join or contribute to….

We are here to serve God and one another in community. We do this by being a people of faith, working together to enrich each other’s lives through gathering, worship, celebration, prayer, listening, pastoral care, building authentic relationship.

The Church by the River
Christ Church Anglican is a member church of the Anglican Diocese of Ontario, part of the National Anglican Church of Canada and the World Wide Anglican Communion.

Baptism and other pastoral services

Dear family in Christ, Advent is upon us, and we will soon be ushering in the season of Christmas. The year draws to a close and we take a moment to reflect on the year past and to give thanks for the blessings and challenges of 2022. I pray this...

END_OF_DOCUMENT_TOKEN_TO_BE_REPLACED

About Us
Our History
Reflections
Stewardship